The NASA Deferred Maintenance (DM) Parametric Estimating Method was adopted in August 2001. NASA commissioned a pilot of the DM method at the Marshall Space Flight Center (MSFC) in late 2001. Three two-person teams completed the MSFC assessments. The analysis from that test resulted in minor adjustments to the method. During the full assessment, the DM method was further refined as the data from various inspections was analyzed.

This process of documenting DM is designed to be a simplified approach based on existing empirical data. The method assumes that:

The first steps in the process are to determine the facilities to be assessed and to group them by categories. The category codes group facilities whose systems are similar and have approximately the same relative system CRV percentage values. For example, one category may be administrative buildings. These are facilities that function like office buildings and have a structure, a roof, an exterior, interior finishes, and typical mechanical systems (HVAC, electrical, and plumbing). Another category may be laboratories. Laboratories have the same systems as an administrative building, with structure, roof, exterior, interior finishes and mechanical systems. But, their percentage of contribution to the CRV will be different, so, these building types need to be separate in the model. Other facilities may include antennas, fueling stations, and other structures that have correspondingly different cost models for purposes of estimating DM. Correct mapping of like facilities is essential to ensure that all systems' contributions to the CRV, and thus the DM, are accounted for.

I.1.2 Determine Facility Systems to be Assessed

Once the facilities are categorized, the facility systems to be assessed are identified by using building system classification. An example of such a system is the American Society for Testing of Materials (ASTM) UNIFORMAT II Classification for Building Elements. The system includes, but is not limited to, structure, roof, exterior, interior finishes, and mechanical systems.

To perform the deferred maintenance estimate, a parametric cost estimate model similar to Figure I-1 is used. This model uses cost estimating relationships (CERs) based on existing engineering data and associated algorithms to establish cost estimates. For example, detailed cost estimates for the repair of a building system (e.g., its plumbing system) can be developed using very precise work measurement standards. However, if history has demonstrated that repairs have normally cost about 25% of the original value, then a detailed estimate need not be performed and can simply be computed at the 25% (CER) level. It is important, though, that any CERs used be carefully tested for validity using standard statistical approaches.

Parametric techniques focus on the cost drivers, not the miscellaneous details. The drivers are the controllable system design or planning characteristics that dominate system cost. This technique uses the few important parameters that have the most significant cost impact on the deferred maintenance of systems within a facility. 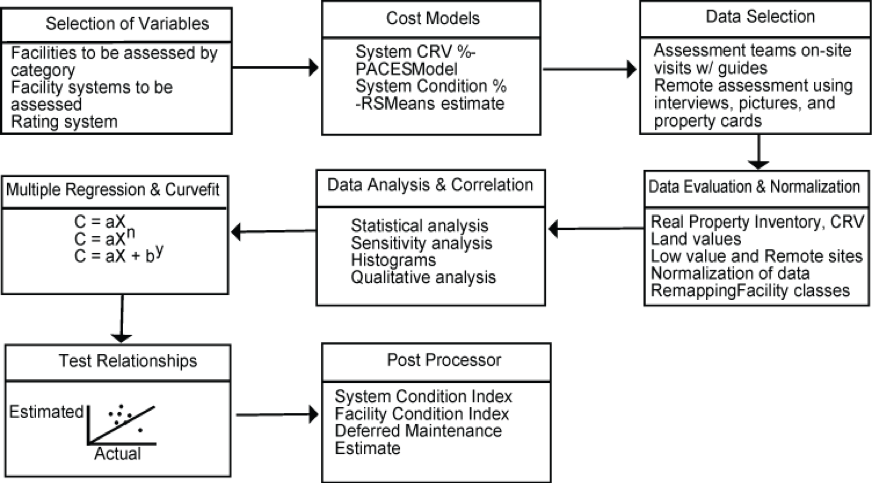 Each system is then assigned representative cost factors based on the estimated percentage of contribution of the major system to the total CRV of the facility within a facility category. For example, in a simple administrative building, the structure may contribute 35% to the CRV, the roof 15%, the exterior 10%, the interior 10% and the mechanical systems 30%â?"all contributing to equal 100% of the CRV. In complex laboratory and testing facilities, electrical systems make up a larger percentage of the overall building cost, so the breakdown might be structure 25%, roof 15%, exterior 10%, interior 10%, and the mechanical systems 40%. The system's CRV percentages are derived from existing engineering data and adjusted, if necessary, to meet unique facility types.

The NASA condition rating scheme is a simple five-tiered condition code system shown in Table I-1. The DM model breaks a facility down into nine major components. An inspector will rate each of the nine facility components with a condition rating between zero and five. The rating is entered into the database and, depending on the asset class of the facility (a launch pad, for example, would have more structural system weighting than a substation), it computes the DM.

After the condition-rating scheme was established, teams went to the field to assess the facilities using the rating system above. The teams rated each system in each facility and entered that information into a database from which is generated a System Condition Index (SCI) for each system, and a Facility Condition Index (FCI) for each facility, site, and the Agency as a whole. SCI is calculated by first determining the CRV of the system in question by multiplying the facility CRV by the percent system CRV. The value of these system CRVs are then totaled. Next, the system CRV for each facility is normalized or weighted by dividing the system CRV by the sum of all the system CRVs. This quotient is then multiplied by its respective assessment rating. These "weighted" SCIs are then added to determine the facilities SCI. The SCI calculation can be calculated for the site, installation, Center, Mission Directorate, or Agency levels.

The FCI is the CRV normalized sum of the condition ratings for each system within each facility. The building FCI is a simple calculation that weights each of the nine system condition ratings by its associated system CRV percentage per DM category. In each system, the rating is multiplied by its system CRV percentage to get a weighted SCI. The sum of the nine weighted SCIs equals the facility's FCI. Table I-2 is an example. If a facility does not have one of the nine system components, that component is rated zero and will have no weighting, and so does not contribution to FCI and DM.

The facility DM estimate is determined by adding the DM estimates of the nine facility systems. Table I-4 provides a sample DM estimate for an administrative facility (DM category 5) with a CRV of $10 million.

I.2 The Model as Used

Using the NASA Real Property Management System (RPMS), the first step in building the DM database was to map each of the more than 400 NASA facility classes into 42 DM facility categories, as shown in Table I-5. It was necessary to reduce the number of NASA classes to simplify data management. It is important to develop the correct facility category to provide a more complete reflection of the system CRV percentages in the different facility types, ultimately creating a more representative DM estimate. The categories were determined based on facility similarity. For example, DM Category 12, Communication and Tracking Buildings, includes NASA facility classes 131 and 140. Category 13, Communications and Tracking Facilities, includes NASA facility classes 132 and 141. These facilities may include antennas, fueling stations, or other structures that have correspondingly different cost models for purposes of estimating DM from those in Category 12.

The DM facility systems were developed from a review of other DM estimating methods for facilities and ASTM E1557, Standard Classification for Building Elements and Related Sitework-UNIFORMAT II. The following nine systems were selected for the NASA DM method:

a. Structure: foundations, superstructure, slabs and floors, and pavements that are adjacent to, and considered part of, the facility.

i. Program Support Equipment: equipment installed in the facility to provide support for operational testing or research. For example, additional ventilation equipment or separate HVAC systems required only to support special testing or programs.

The NASA RPMS contains the CRV for each facility. Table I-6 shows how the CRV is apportioned between each of the 9 facility systems for each of the 42 NASA DM facility categories. The CRV system percentages are derived from the Parametric Cost Estimating System (PACES)2, an accepted estimating tool for Federal construction projects. The PACES method was derived from an evaluation of more than $40 billion of Federal facilities projects.

2 PACES is an integrated, PC-based parametric budgeting and cost estimating system developed by Earth Tech (http://www.wbdg.org/tools/paces.php?a=1) that prepares parametric cost estimates for new facility construction and renovation. It was developed for military facility application and will soon be commercialized for use in the general building, industrial facilities, and transportation industries. PACES is available to military personnel via the U.S. Air Force. A U.S. Government employee can obtain a copy of the current military version of PACES by contacting the Air Force Civil Engineer Support Agency.

12.7.2 I.2.4 Estimated Repair Cost as a Percentage of CRV by System Condition

Each condition rating has a corresponding system condition CRV percentage. These percentages vary by system type and are provided in Table I-7. This table is crucial to the applicability of the DM method and, as such, was analyzed by several engineering sources. Through the use of a survey of major and minor repairs at KSC, combined with an estimated original construction cost using R.S. Means 3 estimating tools, system condition percentages have been developed for each of the nine systems for each of the five ratings. Actual repair costs for a variety of facilities at KSC, such as the Landing Aids Control Building, the cafeteria (Multi-Function Facility), Electromagnetic Lab, Operations Building #1, and Logistics Facility were used to establish the repair costs. The CRVs of these facilities ranged from $602,000 to $22 million.

The estimates for the various levels of repair work were compared to an estimated cost for the system construction. These comparisons (expressed as percentages) translate into the DM condition percentages used in the DM model. The process began with the 1 rating, where the cost for a major repair was established. That cost was then compared to the estimated original construction cost, producing a maximum system condition percentage. For example, a 1 rating in structure equates to 150% of the maximum repair cost of the structure of a facility including some demolition and disposal cost. The system condition percentages for 2 through 4 were then established using the same method.

(Percentages greater than 100 account for demolition and disposal costs.)

However, according to the U.S. Army Corps of Engineers (USACE), 50% of the replacement value is the decision point to determine whether a system should be repaired or replaced. Because a 2 rating is where this decision point falls, the USACE standard was applied as a rule, so, 2 ratings were set at a maximum of 50% of the 1 rating system condition percentage. For example, even though the calculated value for a 2 rating for roofing was 90% for KSC, the highest the rating could be is half of the calculated value for the 1 rating (150% in this case), which equals 75%, because that is when the replacement of the roof would most likely occur. The 5 rating was left at 0% because any small DM that would occur in this rating would be negligible.

This document does not bind the public, except as authorized by law or as incorporated into a contract. This document is uncontrolled when printed. Check the NASA Online Directives Information System (NODIS) Library to verify that this is the correct version before use: https://nodis3.gsfc.nasa.gov.